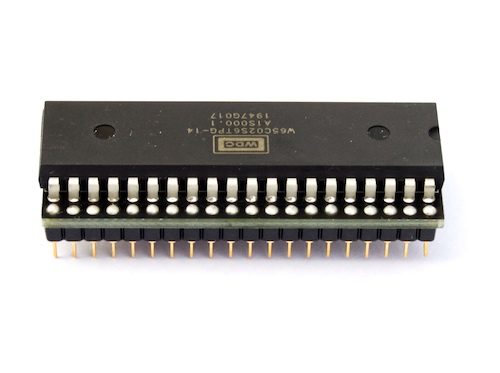 An all-in-one W65C02 on a discreet adaptor

Original 6502 chips are now at least 30 years old. Even if you can find alleged new-old-stock, are they genuine or remarked? Will they work?

The W65C02S is a CMOS chip meaning that it uses little power and runs cool.

Unfortunately the chip itself is not a drop-in replacement for the 6502 in vintage computers like the Vic-20.

It has been suggested that the logic levels on a real Vic aren't quite up to the levels needed by the CMOS, and therefore a circuit has been designed which incorporates the transciever to boost the data lines.

However, I've run this bufferless version for long periods in a real Vic-20, my Vicky Twenty (a Vic-20 clone) and other computers. I've not seen a single hiccup and I believe that this bufferless version is even more stable than the buffered version. Various posts on the Denial forum testify to the W65C02S working in a Vic with these simple connection changes and pullup resistor.

assembled with the W65C02S soldered directly to the adaptor, which keeps the height to a minimum, so as not to foul the keyboard. Overhang is at the absolute minimum, which is just a few mm to the left.