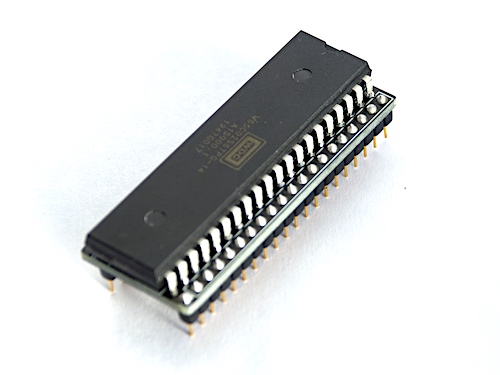 Original 6502 chips will only become harder to find as time goes on and they are now at least 30 years old. Even if you can find alleged new-old-stock, are they remarked? Will they work?

The W65C02 is a CMOS chip meaning that it uses little power and runs cool.

Unfortunately the chip itself is not a drop-in repacement for the 6502 in vintage computers like the Vic-20. Not only are some of the connections a litte different but CMOS chips require higher logic levels than are generally present on the Vic-20 board.

This is the solution. It's an all-in-one W65C02 on an adaptor. It uses a transceiver to boost the data lines. (Address lines are fine, the processor is only sending those, not reading them.)

The circuit was developed by The Byte Attic. His design has been published for some time now, which means that it's now tried and tested. His design uses through-hole components which means that the board was large and covered over other things. I wanted a neater-looking and more discreet adaptor, preserving the original 'DIP' look as far as possible.

This one uses surface mount components placed below the processor, meaning that you don't see them. Overhang is kept to the absolute minimum, which is just a few mm to the left, as you can see in the picture.