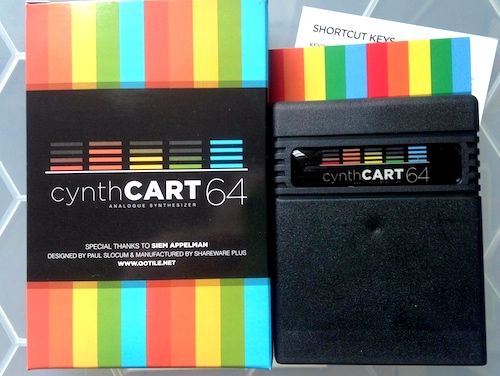 from Shareware Plus (Tim Harris)

a cartridge for the Commodore 64/128 that helps turn the computer into a standalone analogue synthesizer.

CynthCART's key-command user interface allows it to be played and controlled without a monitor, making it especially suitable for live performance.

The original Commodore 64 piano keyboard overlay can be used, and many keyboards are supported via MIDI interfaces including Datel, Passport, Sequential, and Kerberos. (CynthCART does not have MIDI ports - separate cartridge required.) Paddle controllers in port 2 can control filter, pulse width, vibrato, and pitch